THE REPUBLIC OF DUBROVNIK – FINAL CRISIS

DEDICATION
To my mother, Ane Kovacˇevic´, whose love and encouragement were indispensable in preparing this book.

ACKNOWLEDGMENTS
The English edition of this book has involved a number of people who gave generously of their time. This project could not have been accomplished without their enthusiasm, professionalism, and teamwork.
I am especially grateful to the following people for their valuable contributions during the development of this project: Ante Čuvalo for recognizing the value of the book and for organizing, coordinating, and guiding the whole project to its final result; Ikica Čuvalo for suggesting that an English translation be published, and for giving her time and input; Duško Čondić, a Chicago native, who invested much time and energy in the translation of the Croatian original; and Sabrina P. Ramet, for her professional comments. Additionally, I would like to thank Tomislav Kaniški, from the Lexicographic Institute in Zagreb, for drawing the maps, and Andjelka Kulaš for preparing the manuscript for print.
Once again, thanks to all who helped prepare this edition, and to all in the world who helped save this jewel of Croatian culture from destruction in 1806 and in 1991.

NOTE TO SCHOLARS AND READERS
Those who are interested in seeing an account of the atrocities and destruction in Dubrovnik and its vicinity committed by the Montenegrins, Herzegovinian Serbs, and Russians in 1806 can find a detailed report prepared by the French authorities at that time and published as an Appendix to the Croatian edition of this book: Vesna Čučić, Posljednja kriza Dubrovačke Republike. Zagreb; Dubrovnik: HAZU, Zavod za povijesne znanosti & Matica hrvatska Dubrovnik, 2003, pp. 197-261. 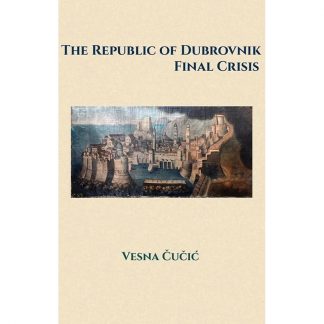 Pregledavate: THE REPUBLIC OF DUBROVNIK – FINAL CRISIS $13,57
Dodaj u košaricu