DEDICATION
This book is dedicated to past and present parishioners of St. Jerome Croatian Church in Chicago on the occasion of the Centennial celebration of the parish.

Special thanks go to my daughter Andjelka Kulaš for the formatting and for help in transcribing names from the church registers, to my wife Ikica for proofreading the manuscript, and to Fr. Jozo Grbeš for his contribution.

CHURCH RECORDS AS A SOURCE OF ETHNIC HISTORY
St. Jerome CROATIAN CATHOLIC CHURCH IN CHICAGO A CASE STUDY
The following article was published in Review of Croatian History VII/2011, no. 1, Croatian Institute of History, Zagreb, Croatia

Catholic ethnic parishes in the United States have multiple functions, especially in the lives of newly arrived immigrants. In addition to fulfilling their religious needs, ethnic parishes provide many services, such as finding jobs, housing, getting a driver’s license, providing native language and folklore classes, and many other. They also serve as social centers and cultural repositories. At the same time, they play a great role as intermediary institutions. On the one hand, parishes help soften the harshness of life for those who find themselves in a new environment and, and on the other, they play a significant role in the process of Americanization, by introducing newcomers and their children to the American way of life.
Parish registers of baptisms, marriages, and deaths are a very valuable source of information and, when examined, provide much more than just names and numbers. They shed light on various patterns and processes, such as place of birth, birth rates, percent of inter-religious and inter-ethnic marriages, causes of death, life expectancy, integration into mainstream America, and other. This study focuses on St. Jerome Croatian parish in Chicago which is celebrating its centennial in April of 2012.

Summary
During the first 90 years of its history, St. Jerome Croatian parish in Chicago had 6,207 baptisms, 2,092 marriages, and 3,615 burials. Out of the total number of baptized, there was approximately an equal number of males and females. Judging by the last names (although an imprecise criterion), about 18 percent of the baptized in the parish were of non-Croatian heritage, while the rest were of full or partial Croatian background. Most of the baptized, especially during the first two decades of the parish history, were the sons and daughters of those who came from the province of Dalmatia, more specifically from the area of Split and Sinj. The highest number of births took place in the 1920s, followed by a sharp drop-off in the 1930s, mainly due to the Great Depression. This change reflects the general pattern of birth rates in Chicago and in the country as a whole. There was a slight increase of births in the post-World War II period and also in the 1970s. A significant factor in the gain were two waves of new immigrants at the time. The parishioners of St. Jerome continued to follow long-held Croatian Catholic family traditions, which can be seen in the relatively small number of births out of wedlock, as well as civil and inter-religious marriages. However, the number of children per family is similar to the fertility patterns in Chicago, which is an indicator of the Americanization and modernization processes among Croatian immigrants in America.
The register of baptisms also provides valuable information on many of those who had been baptized at St. Jerome church but were married in other Catholic churches in the city and wider. The total number of such registered cases is 1,234. They were mostly second generation Croatian-Americans and some non-Croatians. Most of such marriages took place in the 1940s, 1950s, and 1960s. Among the deciding factors to marry in an “American” church, it seems, was the desire to look beyond their ethnic parish community and integrate into mainstream America.
According to the parish marriage register, there were 2,092 marriages during the first nine decades of the parish history. The highest number of them took place in the 1920s. About 50 percent of marrying couples were of Croatian background. Out of that total, about 50 percent of bridegrooms and about 37 percent of brides were born in Croatia. Clearly, more Croatian born men than women were marrying American born spouses. Among the brides that came from other ethnic backgrounds the highest number of them were of Czech nationality, especially during the first decade of the parish history. Only about 8.6 percent of marriages at St. Jerome church were among individuals of different religions, out of which there were more non-Catholic husbands than wives. Most of the brides marrying at St. Jerome were in the mid-twenties and the grooms in the late-twenties. Although the registers do not provide the number of divorces, we do find that among those who were baptized at St. Jerome church and married elsewhere, 39 marriages were annulled by the Catholic marriage tribunal, while 24 were annulled among those who married at St. Jerome. The annulments began in the 1970s, after the Second Vatican Council.
During the first 90 years of the parish history, 3,615 deaths were registered in the church books. Out of that, over 60 percent were males and close to 35 percent females, and the rest were babies whose gender was not indicated. The highest number of deaths occurred during the 1920s. Besides the main causes of death in the early 20th century, which were infant deaths, pneumonia, and tuberculosis, there was a high number of deaths caused by work-related accidents, as well as violent deaths which indicates the working and socio-economic conditions in this ethnic neighborhood, as well as in the city of Chicago at the time. The greatest number of St. Jerome’s faithful departed were laid to their final rest at St. Mary Catholic Cemetery (2,203), followed by Mount Olivet Catholic Cemetery (981). While one might be astonished by the low average age of those who died in the 1920s, the register clearly indicates that there was a constant rise of life expectancy so that by the 1980s it had reached the age of low seventies.
The founding and history of St. Jerome Croatian Catholic church reflects the lasting religiosity and ethnic identity of Croatian immigrants in America. Although ethnic intensity diminishes over time, because of assimilation, social, economic, and geographic mobility, the church registers prove the persistent role of St. Jerome Church, and other ethnic parishes, in the religious and cultural life of Chicago and America. 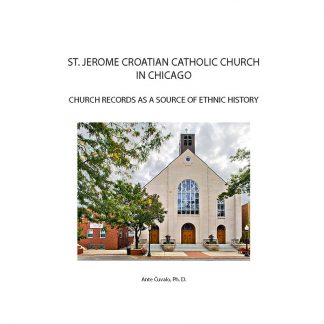