Apocalyptic Days ― In The Shadow of Deception

Happily, I already see: the nation has arisen!
I already hear thousands,
Thousands of thousands,
Marching over our shadows.
With their steps, my heart pounds
to break the Stone wherein it rests.

The Sun will light our Resting Place,
While your muscles become ever stronger,
your steps ever firmer
(despite all the winds) and
a magnanimous cloud to wash the ravines
where our Best fell. And
where the Stones are not ashamed
that evil times covered them with blood.

Oh, I am a Queen once again because of your visions!

“These are the type of books that stay with you even when you put the book aside. This is a worthy witness of an ugly time.
The crown of this work, a real Monument to Death, is to be found on the tragic first page of this book in its full dramatic reality, namely, the dedication: “TO MY MASSACRED BROTHERS,” wherein Fr. Janko lists 65 names of saints and martyrs for the Faith and for our People who have laid down their lives (all too often, young lives) for Church and Homeland.”

IN PLACE OF AN INTRODUCTION
Even though I am on the doorstep of my eightieth year of life, and on the basis of my physical condition and number of years, I can sincerely and rightly say to myself the words of Sacred Scripture, namely, “…let the dead bury their dead.” Nonetheless, I endeavor to release to the public a volume of my recollections which were-not all that long ago-written with blood and sweat, and in those footsteps of life, I, too, trod along with my people, although mostly imperceptibly. And so that the reader might more easily and simply orient himself when reading this work, perhaps it might be advisable that he read the first and last pages of this work at the start, since by doing so, he will come to know in a timely fashion how and why these memoirs were set to paper some forty years after the passing of those foreboding and apocalyptic times. Thus, the outlines of events have become somewhat dull because of the layer of patina set by time; however, they have also been largely cleansed of the momentary pathos and frothiness of the time in which they occurred.
It is good that the events and experiences speak independently from the person who records them. Along with that, I can easily allow that, after all is said and done, at least the wiser reader, in the end, will conclude that these memoirs are both inadequate and understated. However, even as such, the fact that they are perhaps no more than half of what we can imagine took place, nonetheless it is necessary that we point out how Communism, by destroying its “adversaries,” ultimately destroyed itself and missed its goals forever. In the middle of 1981, the major part of my plan to record my experiences was mostly sketched out-at least in my own mind- when the path of my life (and I don’t think it was by accident) set off into another direction. Hence, two other books of mine came into existence-books that are far more dear to me than this one-and, I suspect, to my readers as well.
What appears herein can serve as a piece of a puzzle which will serve for the production of a Big Book which, one day, will be written by those that will come after us, and when that time comes and the typesetting is done, there will be nothing more to be said.
And, for the record, I have to point out that I never considered all “Partisans” or all “Communists” to be evil men. The real source of their evil was their leadership! Meanwhile, those wiser and stronger in the population, who did not join the Communist party, were encouraged and cleansed by the thought that they should, in sweat and blood, fence off their land with children and hearths. In order to do that, and by not allowing deceit to reoccur, they understood that they had to bring forth many children, while the nation was giving birth to dreams for which, from time to time, they faced death with joy, as I once wrote. And, after all, they had to believe, unshakably, that Hope, is the last to die….

ABOUT THE AUTHOR
Nikola Bubalo was born in Turčinovići near Široki Brijeg on January 31, 1913, and, as was customary, took the new name of Fr. (Brother) Janko when he entered the Franciscan order (1932). He studied in Široki Brijeg, Mostar, and Wrocław, Poland. Fr. Janko spent his entire priestly life serving various parishes in Herzegovina, namely Rasno, Vitina, Čerin, and Humac.
As a young man he did publish poetry in various publications during the interwar years but then stopped writing for several years after the Second World War. His first book of poems was published in 1973, when he was sixty years old. After publishing those poems, under the title of Koraci od jučer/ Steps from Yesterday, other books of poems followed through 1979, namely, U nedogled okrenut/Turned towards the Vanishing Point, Između sna i zastava/Between Sleep and Flags, and Gorko drvo/Bitter Wood. A book of selected poems, Blagoslov darivanja/The Blessing of Giving, came out in 1983, and his last book, Na kraju života/At the End of Life, was published in 1995. Bubalo’s poetry aroused no small amount of interest among readers and critics, and he is represented in several modern anthologies of Croatian poetry.
The prose works of Bubalo are of a documentary nature and are closely tied to the apparition of the Blessed Virgin Mary in the village of Međugorje (1981). Those works have been translated into some ten languages. The present work in hand, Apocalyptic Days, is primarily saturated with documentary facts, yet, at the same time, the work reveals the author to be both a creative thinker and a poet. Relating horrible events, especially those taking place during the Communist “liberation” of Herzegovina in 1944 and 1945, Bubalo gives a first-hand testimony to the events and proves he is a superb prose author in the field of memoir writing. The book serves as a testament to the tenacity of the Franciscans and the people they served during the war, and the Communist terror in the post World War II years.
Father Janko passed away from this world on February 21, 1997 and joined in God’s eternal domain his Franciscan colleagues and martyrs to whom he dedicated this book.

“And, as for us, after all that transpired, it would be good that we, unshakably come to believe that Hope, nonetheless, is the last to die…” 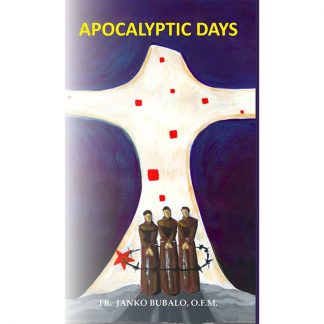 Pregledavate: Apocalyptic Days ― In The Shadow of Deception $5,43
Dodaj u košaricu